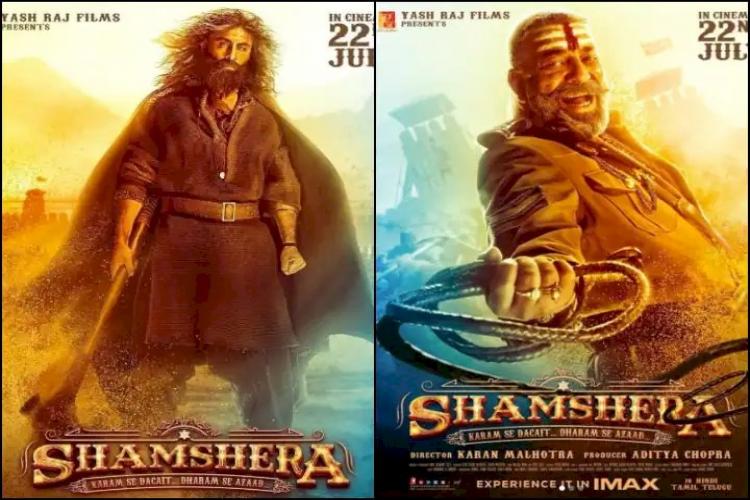 Ranbir Kapoor and Sanjay Dutt will be seen standing opposite each other in Shamshera. Before the release of Shamshera, a behind the scene video has recently been released. It talks about the onscreen clash of Ranbir Kapoor and Sanjay Dutt.
Film director Karan Malhotra is seen saying in this that it was a challenge to shoot the fight scene of Ranbir Kapoor and Sanjay Dutt onscreen. Also, this scene onscreen will be no less than a treat for his fans. Karan told how difficult it was for them as a director to fight each other in action sequences as they share completely different equations in real life. Director Karan Malhotra also shared that the two used to worry about the fight sequences.
Karan Malhotra called Sanjay’s Shuddh Singh a negative giant in Shamshera and Ranbir’s Bali a small, crazy, demonic spark of hope. The filmmaker shared that Sanjay used to be more alert while doing fight scenes with Ranbir in action sequences, as he treats the actor like his son. Karan said, “He kept saying, Son, if I will do this, then Ishko Laga na jaye.” At the same time, Ranbir Kapoor is seen saying that “he is Sanjay Dutt man, how will I do it.”
In the video, Sanjay is seen admitting that he had to face this hesitation, and he explained, “I have had a relationship with Ranbir since he was a very young child and he was growing up. That even to fight with me, I used to worry too much.” Ranbir shared that despite Sanjay’s concerns, he has suffered the most in his life in these scenes.
He said, “I grew up with Sanjay Dutt’s poster in my wardrobe at the age of 9 and 10, then got a chance to play a role in a biopic, and now got a chance to work with him.” Said, “It’s amazing that he’s my opponent! He hits me and I have to hit him on the screen. Because I don’t feel that way for them. I see Sanjay Dutt, he has a different personality, I just want to hug him and talk to him.”
After playing the role in Sanjay Dutt biopic, Ranbir Kapoor is seen standing opposite the actor in his upcoming film Shamshera. Ranbir will be seen in a double role for the first time in his career in the period action drama. In this, he is seen playing the role of both father and son. The film, set in the fictional town of Kaza in the 1800s, Shamshera also stars Vaani Kapoor. The Aditya Chopra production also stars Ashutosh Rana, Saurabh Shukla, Ronit Roy, Tridha Choudhary, and Pitobash Tripathi. It is slated for theatrical release on July 22 in Hindi, Tamil and Telugu languages.

When Rishi Kapoor gave this advice to his son Ranbir Kapoor, he said- Your wife will give birth to Raj Kapoor and my grandchildren..