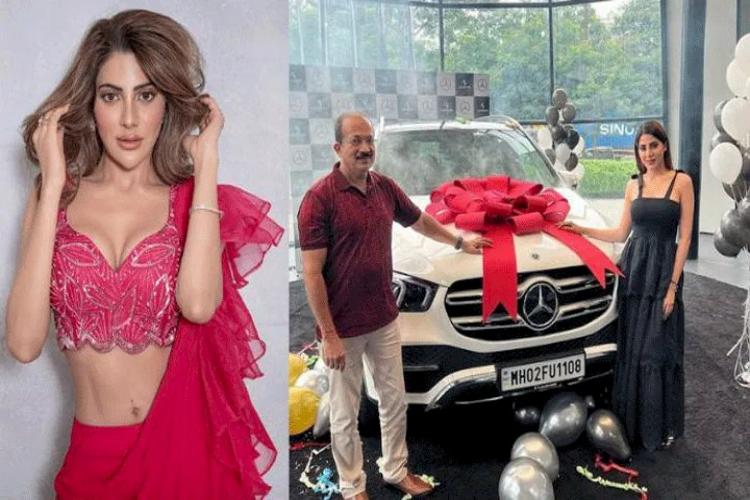 Nikki Tamboli, the ex-contestant of Bigg Boss, is not interested in any identity. From the South Film Industry to the small screen, now Nikkis coin runs. Now recently Nikki Tamboli has shared the good news with her fans. Actually, Nikki has bought a brand new luxury car with her earnings. Nikki is very happy to buy her luxury car. He has expressed this happiness by sharing the post on social media. Nikki has brought a brand new white-colored Mercedes Benz to her house. Now that the actress has bought the car, she is seen celebrating this celebration with her father.
The pictures shared by Nikki Tamboli are seen standing in front of the car, posing, and sometimes seen cutting the cake. Not only this, but he has also worshiped his new car, as well as posed with his father. Fans are very fond of these pictures of Nikki Tamboli. On this post of Nikki Tamboli Post, comments from fans to celebs are seen showering. From Arjun Bijlani to Jasmin Bhasin have congratulated the actress. Nikki Tamboli gained popularity from Salman Khans show Bigg Boss more than from her South films.
She emerged as the second runner-up in this show. After Bigg Boss, Nikki Tamboli got a chance to be a part of Rohit Shettys show Khatron Ke Khiladi 11. After this show, he was also seen in many music videos. Recently, a music video of her has been released, name is Ek Hasina Ne. In this song, she was seen with Shaheer Sheikh. According to the latest media reports, soon Nikki Tamboli can also participate in Jhalak Dikhhla Jaa.

Arena Animation, a pioneer in the global media and entertainment training industry